Most photographers understand the basics of White Balance. We understand that light can have different color temperatures that can affect how our photographs appear. Many people, myself included, always leave their camera’s white balance setting on AUTO. We can adjust the image’s color later in Lightroom or Photoshop. Some people, including many wedding photographers, prefer to set a custom white balance on their camera so that the image has the correct balance at the time the photo is taken.

While toying around with my camera recently I began to question HOW the camera achieves the correct white balance in AUTO mode. So I undertook a few short experiments to find out. But first just a few bits of science.

Most of us understand that if you mix Red, Green and Blue light in equal proportions you obtain white light. In fact, you can create any color in the visible spectrum by mixing these three colors in different proportions.

As a digital photographer you should also know that the camera’s sensor has filters that break down the incoming visible light into its Red, Green and Blue components which are then recorded to create the digital image. 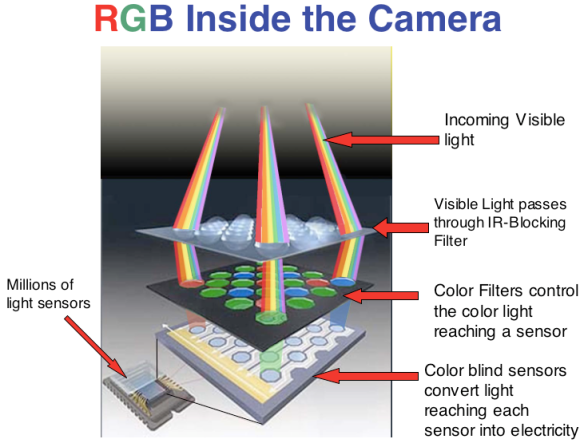 We typically describe the color of light by its temperature in degrees Kelvin. This comes from the world of physics. According to physics, when you heat a ideal black-body (a theoretical object that does not exist in the real world – however, think of a chunk of iron) it will begin to radiate light. At low temperatures the black-body will emit infrared light that is invisible to the human eye. As the temperature increases the light emitted will be more energetic and have shorter wavelengths. Thus at about 5000 degrees Kelvin the black body will begin to glow red. At 6000 degrees K the light emitted is centered on yellow but contains a mixture of all the visible colors and thus we perceive it as white. As the black-body gets even hotter the light emitted is in the ultraviolet region and once again invisible to the human eye.

To figure out what was going one inside my camera I set up a piece of white cardboard on a stand and outfitted my Nikon D610 with an SB910 flash. I chose to do my experiments with flash because it represents an easy to control, consistent light source. My camera settings were 1/60 second at f5.6.

With the White Balance (WB) control  set to AUTO I took a photo of the white cardboard. I then took successive photos with the WB control set to Incandescent, Fluorescent, Direct Sunlight, Flash, Cloudy and Shade.

Each of these photos were loaded into Photoshop which was used to measure the RGB histogram for each image and record the intensity of each of the three primary colors. The results are presented below.

When the camera was set to Auto WB the photo was a uniform grey of about 50% and the RGB histograms lined up perfectly. When the camera was set to Incandescent WB a completely different result was obtained. At this setting the camera was expecting to “see” light of about 2900 degrees K but in fact the color temperature of the flash is about 5500 degrees K. Thus the light source is much bluer than light with a temperature of 2900 K. You can also see that the RGB histograms have very little overlap. Similar results were obtained using the Fluorescent and Shady WB settings. The Direct Sunlight, Flash and Cloudy settings resulted in relatively good balance. This was expected because the color temperature for those settings are quite close to the actual color temperature of light from the Flash.

To drive the point home I color corrected the Incandescent image in Lightroom using the WB eyedropper tool in the Develop Module. The result is shown below. The formerly blue image is now a uniform grey and the three RGB histograms line up perfectly. 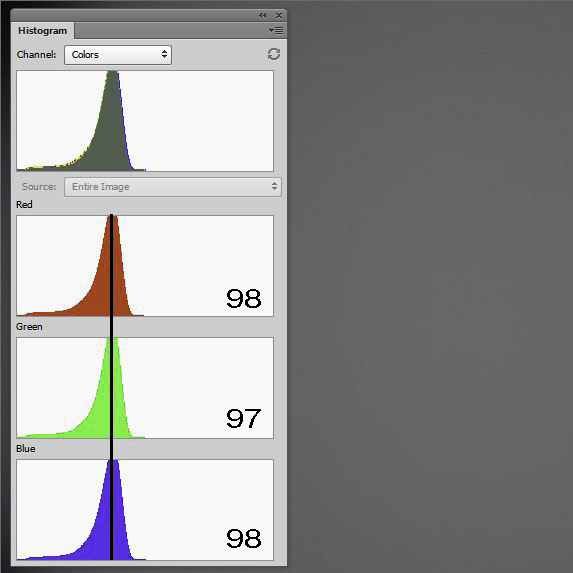 Of course these experiments represent an ideal laboratory setup. The colors present in the real world are very different and very complex. Yet the camera operates in the same fashion. However, a little human adjustment may still be necessary to obtain the most visually pleasing result.