True to its promise, the Dallas Safari Club auctioned off the right to kill a black rhino in Namibia over the past weekend for a price of $350,000. The Safari Club has stated that 100% of the money will be contributed to Namibia’s Game Products Trust Fund. The details for the auction were published previously in my October 28 post.

Let me once again state that I am not opposed to ethical hunting. I am also not a knee-jerk liberal conservationist. I understand the pro-conservation arguments being made for the auction by the government of Namibia and other agencies. However, in this instance I think they are wrong.

One of my favorite truth tests to apply to any argument  is the oath one must take to testify in court in the United States. “I swear to tell the truth, the whole truth, and nothing but the truth.” In other words, I will not lie, I will not lie by leaving out any relevant information, I will not twist the truth such that it becomes a lie. If statements fail this test I immediately call into question the trustworthiness of the person and their other statements.

Ben Carter is the executive director of the Dallas Safari Club and has issued multiple statements about the auction. Mr. Carter is not a stupid man. He knew when the Dallas Safari Club agreed to auction off the rights to kill an endangered Black Rhino that there would be conservationist backlash. As expected, he has attempted to make their view known and to put a good face on the auction. However, when I apply the truth test I find his statements coming up short.

According to NPR   “Carter says many of those who object are not educated in the role that hunting plays in conservation. A habitat can only sustain a certain population, he says, and any excess can be harvested and used to raise money through selling things like hunting licenses and permits.” [1]

This is a classic case of twisting the truth into a lie. Carter claims first that we are uneducated and then wants to “educate” us. Trust us, we understand how hunting can be used to manage wildlife populations, especially when a population outgrows its habitat. This frequently happens with wild deer in the United States. A specific number of permits are issued by the Fish and Wildlife Service to reduce the population size to that which can be supported. This is rational and humane policy. However, that is not the situation with the black rhino. There are only 5000 individuals left in the world! They are not outgrowing their habitat. In fact, the $350,000 raised by the Dallas Safari Club will be used in an attempt to increase the number of black rhinos in the wild. No, Mr. Carter is seasoning his comments with just enough science to make the spoiled meat a bit more palatable to the public.

The other claim is that “the hunt will be for an old, post-breeding, aggressive bull known to charge and kill younger bulls, cows and calves in Mangetti National Park. Removing these animals increases herd survival and productivity.” [2] I doubt that there are scientific studies to back this statement up, although it probably represents the best opinion of some experts. The health of a species is not just determined by numbers. Natural Selection has a lot to say about the health and success of a species. Perhaps the old bulls serve a function as reproductive gate keeper. Young bulls who are not sufficiently fit to displace the older bull do not reproduce and pass on their genes. Younger bulls who can defeat the older bull are more fit and theoretically pass on “stronger” genes. Thus the fitness of the species is ensured. The old bulls are not useless. They may be essential. 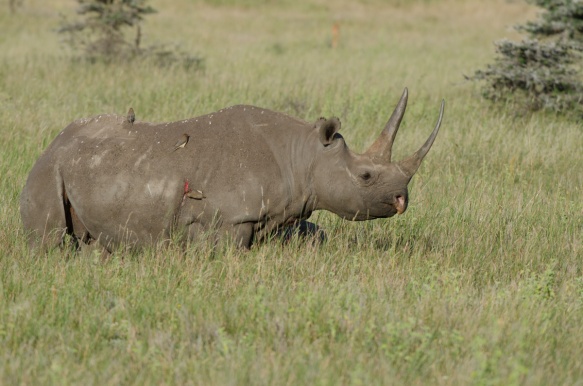 I would like to return to the concept of ethical hunting. I can admire any hunter that tracks his prey and kills it in a sporting manner, i.e.: in a manner that gives the animal a fair chance of survival. I’ll use the analogy of fishing. Catching fish in a lake, river or ocean with a rod and real is ethical sportsmanship. It takes skill, knowledge and patience to succeed. And the fish have a chance of survival. Dragging a net through the ocean is not fishing, it is fish farming. It requires little skill and the fish have little chance of escaping. Another example is hunting from a helicopter, popular in Alaska and other Northern territories. While there is no doubt a great deal of skill involved by the hunter and pilot, the hunted animal has little chance of escaping the fast moving helicopter. However, a hunter that tracks a buck through the woods on foot and shoots it from 50-100 yards away is showing great skill and it is not a certain bet that the hunter will get the buck. This is ethical hunting.

Trophy hunting is different. By trophy hunting I am referring to the killing of an animal solely to obtain the head, pelt or other parts. This type of hunting is done for the thrill of killing the animal and the joy of seeing it’s dead body hanging on the wall. Legitimate arguments for trophy hunting have largely disappeared in the last century. With the rise of the media there are no longer any educational arguments for trophy hunting. Likewise, any type of hunting done simply for target shooting is also immoral.  We should not kill animals for our pleasure or amusement. However, if the hunter kills a (non-endangered) animal and harvests the meat, then I don’t care what he does with the rest of the carcass. Keeping a trophy is fine under that condition. It’s not for me but I don’t condemn the hunter.

So we now come back to the black rhino “hunt”. Is this ethical hunting. I’m fairly sure that there is little taste for old rhino meat. So what about the sport of the hunt, does the rhino have any reasonable probability of avoiding being shot? The answer of course is no. The fact that the Namibian government has already pre-selected individuals to be killed suggests strongly that they know exactly where the individuals are. Thus there is no sport. The hunter and his tracker will simply drive their range rover up to the targeted rhino and put a high powered bullet through its head. Under these conditions, I do not understand how any ethical hunter could pull the trigger. According to Wayne Pacelle, president of the Humane Society of the United States,“Shooting a black rhino in the wild is about as difficult as shooting a parked car.”

This blog, nor any of the many other articles written about the hunt are going to change the outcome. However, I do hope that the Fish and Wildlife Service refuses to issue a permit to bring the trophy into the United States. Make your voice heard. To protest the importation on the black rhino trophy carcass contact: