Humble apologies to my gentle readers. Due to travel to the Midwest, Christmas and a nasty cold I have fallen behind in my postings. However, I’m back with the final day of our South African Safari.

We awoke on this, the 12th, and last day of our safari with both a sense of sorrow and relief. Sorrow because we did not want the experience to end. We had seen so many incredible sights and animals in the past 2 weeks and yet it was time to go home. Home to our own bed and our own wildlife (our 3 cats, Casper, Jasmine and Bosco).

It was an absolutely beautiful morning with golden light. The animals seemed to be energized, everything was moving. We almost immediately passed some rhinos grazing in the field. As always, they were accompanied by oxpeckers. With their bright bill and eyes I never tire of looking at them.

Our ranger headed the land rover toward the river to see if the overstuffed lions we observed the previous day were still there. He was driving at a pretty good clip as we passed a watering hole with a grey heron in it. The light on the pond was incredible. The water looked like liquid gold. We were yelling at our driver to stop but he kept going. We finally got him to stop and back up so that we could get the shot. It was worth it.

Leaving the heron behind we found a spotted hyena, sculking through the tall grass, that clearly had the scent of something. We continued on to the river and sure enough, the lions were still there. Still looking over stuffed and lethargic. It was clear that we would see no action out of this group today so we moved on.

Click on any image to enlarge it. Hover over an image to reveal the caption. 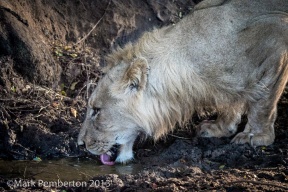 When we left the lions it was still early, about 6:40 am. We sighted a small herd of impala and then some steenbok. Steenboks are really cute but hard to photograph. They are very shy and hide when approached. However today we were lucky. The steenboks chose to hide in the tall golden grasses that lined the road. With the beautiful lighting that we had that morning we got some wonderful shots of steenboks backlit by the morning light and surrounded by the dry golden grass. 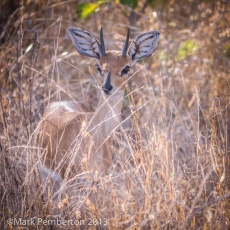 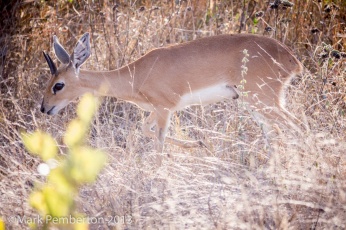 We heard via the radio that there were leopards in the area and headed off in the direction of where the reports were coming from. It took about an hour to get there and find the leopards. There were 3 of them, 2 males and 1 female. According to our ranger the female also had one or more cubs although they were hidden. We got there just after the female and one of the males had a fight. Apparently the male was interested in mating and the female was most definitely not interested. In this case the male came out on the loosing end. 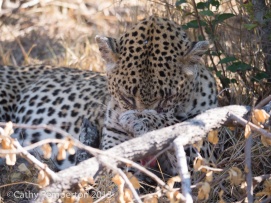 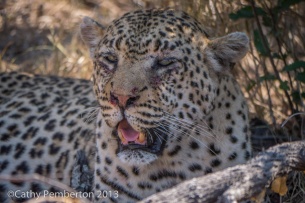 The bloodied and beaten male attends to his wounds.

We continued to track and watch the leopards for almost an hour. The other male was also interested in mating but the female continued to show that there would be no fooling around today. It was fascinating to watch the interplay between the male and female and how the female controlled the situation even though she was much smaller than the male suitor. 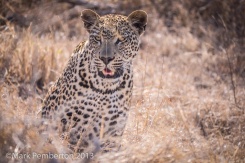 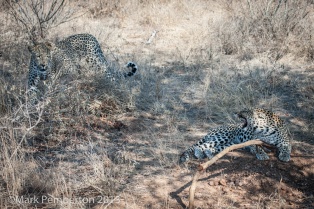 The male suitor approaches the female.

The female make her position clear.

The female wants no part of courtship today. 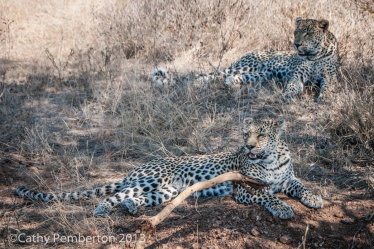 And thus ended our 12 day safari. We had to head back to camp so that we could catch our flight to Johannesburg. However, our adventure was not quite over yet. From Johannesburg we would fly to Cape Town for a 3 day visit to this jewel of the African coast. During our visit there we would see penguins, fur seals, whales, sharks as well as visit incredible wineries and some of the most beautiful coastline I’ve ever seen. Stay tuned.